Built in 1949, by master architect, John Lautner offered the market and film industry, The Schaffer Residence located in Glendale, CA.  Currently, the 2 bedroom and 1 1/2 bathroom home is listed for $1,395,000.  With that said, there will be an open house Tuesday, October 30, 2012 from 11am until 2pm. The mid-century modern masterpiece was chosen by Tom Ford as the home of George Falconer, played by Colin Firth in A Single Man, set in 1962. 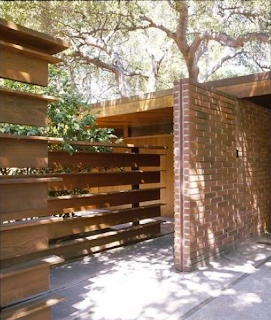 Tucked away in the Verdugo Mountains, this boastful home uses local resources such as redwood, concrete and glass to create a modern retreat of 1,698sf resting on 11,000+sf surrounded by mature trees in a quiet Glendale neighborhood. 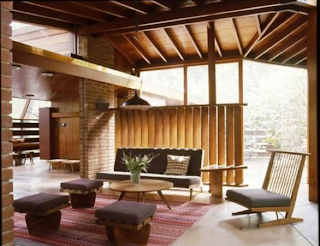 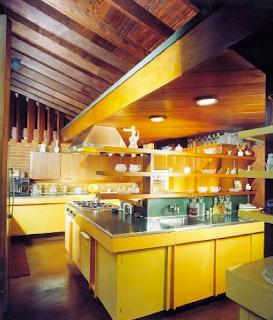 Restored surfaces and hardware are found throughout this home with incredible integrity intact.

MLS listing 11-505859, courtesy Crosby Doe, CD&P.
Character of a House: A Single Man:
Set in Los Angeles in 1962, at the height of the Cuban missile crisis, A Single Man, is the story of George Falconer, a 52 year old British college professor [Colin Firth] who is struggling to find meaning to his life after the death of his long time partner, Jim [Matthew Goode].  The home plays the perfect backdrop with its architectural features presenting the viewer with more depth of George's psyche.  Below, creating a transparent separation, through a plate of glass, we see George.
George dwells on the past and cannot see his future as we follow him through a single day, where a series of events and encounters, ultimately leads him to decide if there is a meaning to life after Jim.  The architectural lines of this home create a true sense of tension and things going eschew with George.
George is consoled by his closest friend Charley [Julianne Moore], a 48 year old beauty who is wrestling with her own questions about the future. New Year's resolutions anyone?
A young student of George's, Kenny [Nicholas Hoult], who is coming to terms with his true nature, stalks George as he feels in him a kindred spirit.  Kenny aids George as he goes into the bathroom to retrieve rubbing alcohol and bandages.  Pulling open a vanity drawer,  he comes across a revealing detail about George's life.
A Single Man is a romantic tale of love interrupted, the isolation that is an inherent part of the human condition, and ultimately the importance of the seemingly smaller moments in life.  The house creates the subtle character of George's psyche, which has always fascinated me.
A Single Man, film stills from the work of cinematographer Edwuard Grau.

Click here for other locations from A Simple Man.

Watch the trailer for A Simple Man:


Map to The Schaffer Residence:

Posted by modernhomesla at 7:57 AM