High above Sunset Plaza in the Hollywood Hills at 1810 Rising Glen Rd, you come upon a 1969 single-story mid-century modern design by architect, Harold 'Hal' Levitt.  The gated and private five bedroom and five bathroom design is perched high above the road.  It is more than an exquisite house, it is an exquisite property.  What is appealing is its position in the hills.  This is a compound with a main house and elegant pavilions up on the hillside. With a design background, Levitt was never shy in showing dynamic expression through architecture. He understood the impact his design would have.  He enjoyed working with large surfaces, demonstrated with this particular design, while allowing nature play the softer role. Just look at the curve of the driveway wrapping around nature as you head upward.  Not a bad entry, I'd say.         If you are a qualified buyer and would like more information, contact modern homes los angeles. 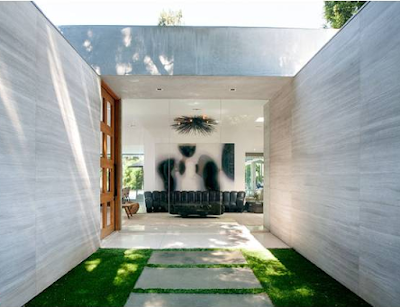 Levitt's love with nature harmonically merge the outdoors with the indoors. This mid-century love affair with the outdoors and environment were a concern within the philosophy of mid-century modern architecture.  With a strong background in design, Levitt took it upon himself to go big.  A prime example is the photo above of the entry to the home.  Here, Levitt uses large mass to hold the fort while a large plate glass wall allows a seamless flow to bring the outdoors into the interior.  It is as though the design becomes a gateway to nature. 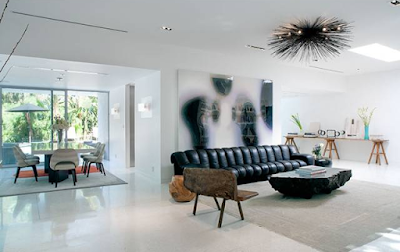 The living room is quite extraordinary with its walls of glass, terrazzo floors, and exquisite finishes to present a tranquil and sophisticated design. Levitt extends the interior fireplace wall through plate glass and outdoors, creating a garden wall.  Again, wonderful mid-century design.  By now, in 1969, the movement was strong and thriving.  Levitt had been refining his skills by this point.  Surrounded by lush verdant period landscaping on a very private lot of approximately an acre of prime hillside land.  The pride of ownership shows in this pristine one-story turn key home that has been updated with the finest fixtures and finishes.  This mid-century modern architectural by Hal Levitt is being offered for $7,195,000. 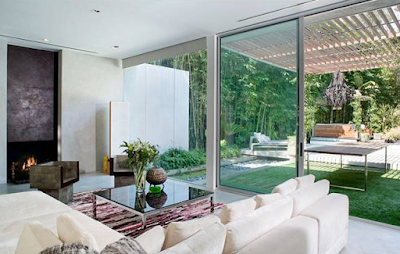 The kitchen is a clean and crisp design and equally as understated as the rest of the home.  With a wall of sliding glass, the pass-through from the kitchen to the outdoor patio around the pool completes the functionality of how the kitchen and its position within a home plays a dramatic role, especially with those who entertain. 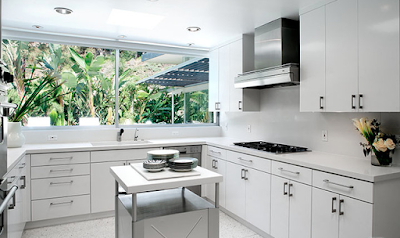 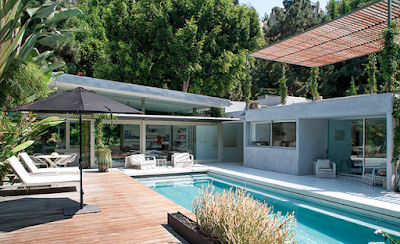 The master bedroom has a beautiful fireplace to keep you cozy on those chilly evenings and a private garden retreat through sliding doors. The master bathroom is like a spa retreat with the finest in resources and finishes and again nature is easily accessed through fenestration.  This modern geometric design is an all together clean design with a touch of International Style, Bauhaus and Modern philosophies incorporated throughout this home. The pavilion-like qualities in the architecture throughout the estate are quite something. 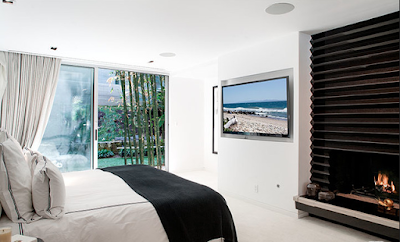 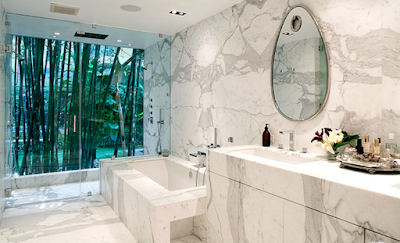 The sleeping areas are serene and peaceful with gardens and nature through large sliders. Again, how Levitt uses walls of glass and minimizing the envelope's need for anything other than glass is apparent in another of his bedrooms.  Beautiful light shimmers its way into the clean and tranquil interior as you can escape through the sliding doors and out onto a private garden. 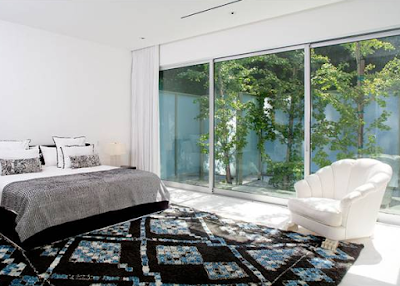 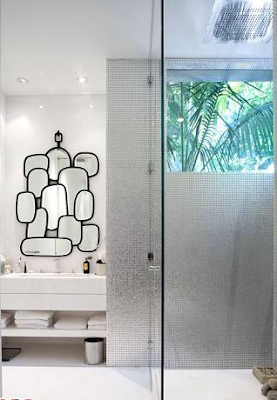 Abundant outdoor seating areas and retreats are found throughout this tasteful design.  It was the late sixties so the pool was synonymous with Southern California modern architecture and living.  Here the pool becomes the central focus as the family room opens itself onto the pool deck and pool area.  Plenty of room to entertain and relax with friends while passing through walls of glass in and out of home and nature. 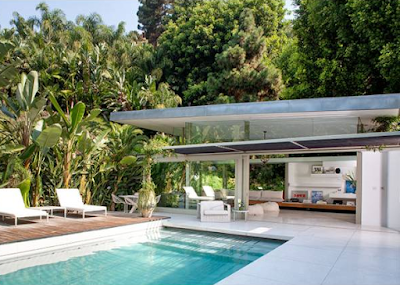 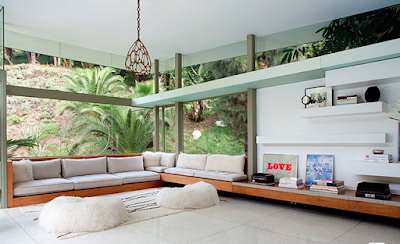 The property imbibes park-like grounds with mature plants and manicured gardens. The setting of this modern design is an experience all unto itself.  This home happens to position itself on one of the larger lots at the upper end of Rising Glen Rd.  Imagine owning an acre of land, let alone a parcel with a gorgeous mid-century tasteful architectural design by Hal Levitt.  The feeling of being in a forest reserve is high while amongst the lush and lovely hillside landscape. 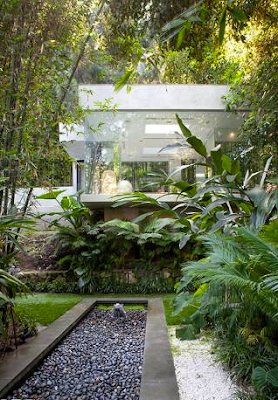 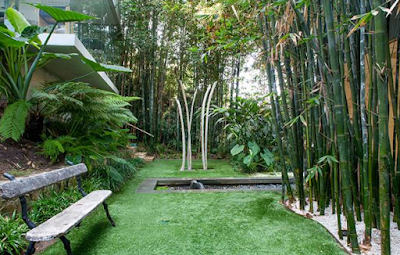 Positioned above the home are two modern pavilion-like structures.  These glass boxes could easily be utilized as an office, gym, studio or meditation area.  Anyone looking for the finest in design and wants to be close to the action down below on Sunset Blvd, but still wants a relaxed home lifestyle, than this home should be yours.  Serenity and peacefulness play on your senses in this home. 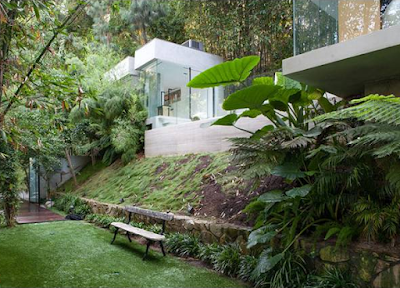 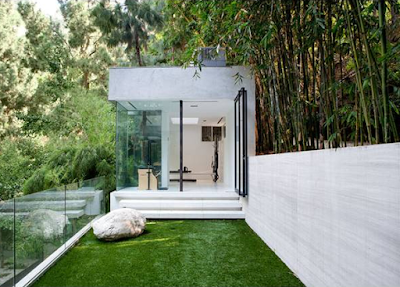 The second pavilion being used as a gym. 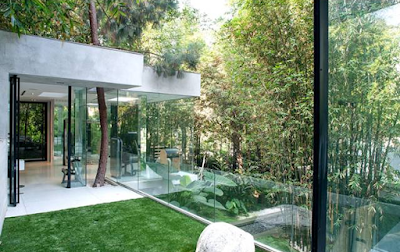 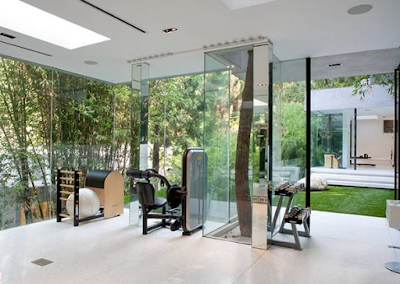 Above the property rests a grassy knoll with western exposure allows one to admire views and take in the sunshine. 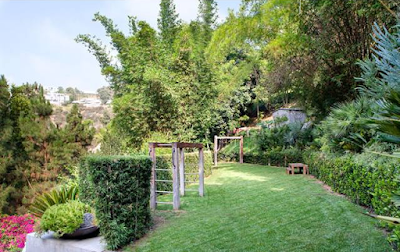 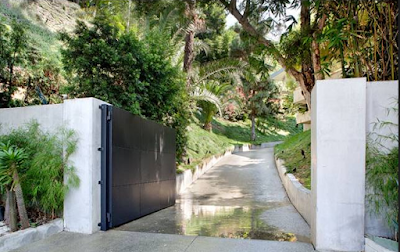 Public record shows the home consists of 3,726 square feet of interior living space, making this home cost $1,931 per square foot.  Along with this being a turn-key and pristine architectural treasure.  At note, this home changed hands in 1997 for a price of $1,465,000.  It just so happens that mega producer Darren Star was the buyer.  In 2005, it landed in the hands of a denim mogul who purchased the mid-century modern home for $4,650,000 leaving a nice profit for Star. Currently, the home is once again listed after on-again off-again market listings since 2013. It was first offered at close to $10 million for the property at that time.  My instinct tells me this Hal Levitt design will sell this time around at or above the .

Harold "Hal" Levitt is perhaps best remembered for the homes he designed for Hollywood’s elite, including Walter Mirish, Steven Spielberg, and Lew Wasserman. Mr. Levitt started his practice in the early 1950’s after working for the famous residential designers Roland Coate and Burton Schutt. Mr. Levitt’s work reflects the best modern design philosophies of mid-century Los Angeles. The intermixing and re-interpenetration of the indoors and outdoors was used extensively in his projects. Large glass surfaces, interior courtyards, and surprising entry sequences exist throughout his residential work and blur the boundary between the interior and exterior. In many of the homes, Mr. Levitt designed a solid large-scale door that appears from the street as the entrance to the home, but the door will lead instead to a protected courtyard. Mr. Levitt’s natural graciousness combined with his artistic vision made the ideal combination for a residential designer, and over his half-century career Mr. Levitt built long lasting relationships with many of his clients. Mr. Levitt also designed many notable commercial projects such as the Riviera Hotel in Las Vegas and the Academy of Motion Pictures, Arts and Sciences Building in Los Angeles. Harold Levitt was born in San Francisco on July 26, 1921. He earned a bachelor’s degree in graphic arts at Stanford University and an architecture degree at University of Southern California. He retired from his own practice and moved to Reno, Nevada at age 79, and died from natural causes two years later. - Levitt+Moss Architects