"The D'Angelo House", a Futuristic Desert Carousel, Gyrates onto Market

Located at the base of the San Jacinto mountains, a small enclave of homes can be found in the Snow Creek area, just outside of Palm Springs.  Here, gyrating against the harsh climate and dramatic landscape is the "D'Angelo House", a vacation pod, a short distance from Palm Springs with 2 acres of land surrounding the rotating high-tech and futuristic desert retreat.
The revolving home was built in 1963 by Los Angeles businessman, Floyd D'Angelo of Aluminum Skylight and Specialty Corporation.  D'Angelo partnered up with aerospace engineer friend, Henry Conrey, to design a rotating home to showcase D'Angelo's product.  Not only did D'Angelo want to showcase his product, but he also was a designer and knew a thing or two about the harsh desert climate with intense sun.  Having the home rotate 130 degrees, a quarter rotation, addressed the concerns of the climate while allowing for the most scenic desert views from the home.  The carousel-like D'Angelo House" located at 15948 Snow Creek Road, is currently being listed for $279,000. 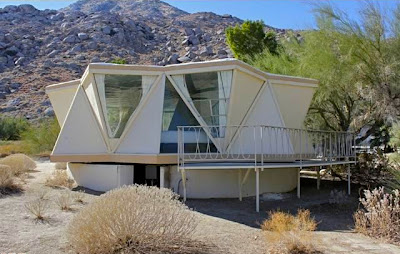 The 750 square foot pod with futuristic angles to couple the engineering sophistication, has an open floor plan with a fireplace centered in the home.  It truly dictates to anyone looking to getaway to their writing oasis or for anyone who loves the genius of the design itself.  The house has it's center core where plumbing connects through universal joints with stationary land pipes.  The electrical cable wraps and unwraps around the central shaft. 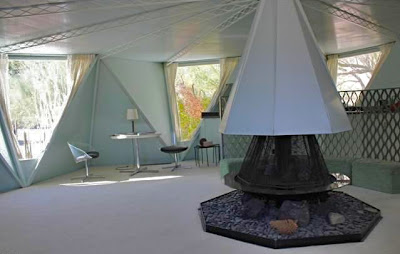 The open kitchen on one side of the front door is separated by aluminum partitions for the bath area and small study. 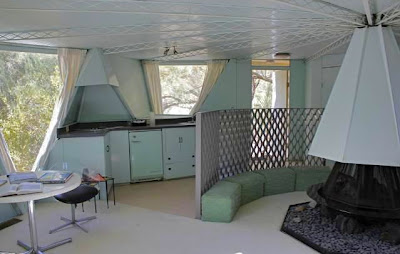 Aluminum open-web trusses support the roof from the center above the fireplace to the outer walls. 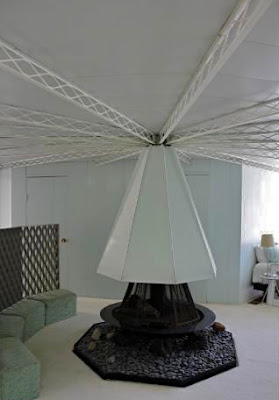 D'Angelo must have loved the color of mint green.  The walls, floors, carpet, partitions, cabinets, and refrigerator were all originally mint green.  The current owner, who comes from the NYC ad agency world, has cleaned up the place and tightened the finishing, since ownership.  There was much work for the owner to perform once he got his hands on the dilapidated star ship.  Everything was a mess upon his purchase. 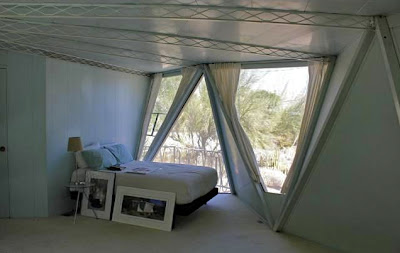 The polygonal exterior features alternating glass and solid canted triangular wall panels were framed with the post-war aluminum resource readily at hand to D'Angelo.  All of the mechanical equipment is hidden from the naked eye.  The home is raised with cement block skirting the bottom of the house and resting on sixteen struts with rubber tire casters on an annular rail positioned above a concrete slab. 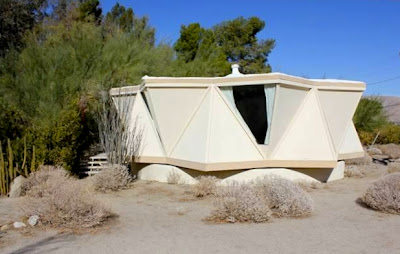 In order to rotate the home, D'Angelo and Conrey worked on a small electric motor that drives an engaged pinion into the toothed circular rack attached to the house frame.  D'Angelo adapted a device from his product company that was made to open and close aluminum lovers. 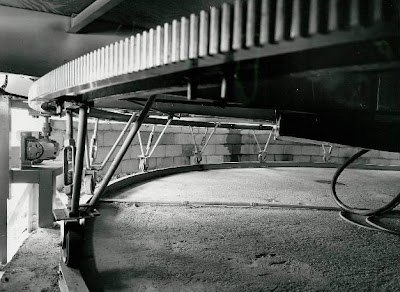 Originally, D'Angelo powered the mechanical equipment through a photovoltaic cell on the roof which powered the system's rotation arc. 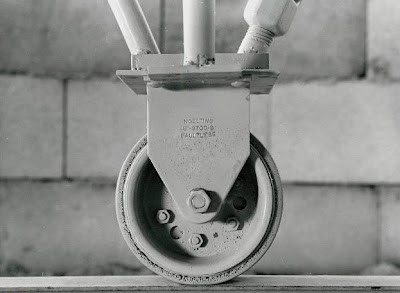 The current owner has since replaced the mechanical motor as it was missing upon his purchase back in 2002, when he snatched up the home for $85,000.  Missing windows, missing motors and years of neglect did not matter to the current owner.  He was hell-bent on purchasing this engineering marvel of a home.  In the words of the current owner, "You'd never say this was a great piece of architecture, but you would argue that this is a great creative burst of imagination. And that needs to be saved."
With the owner's taste and appreciation for preservation, the home is once again a desert retreat through meticulous detailing and once again showing integrity of design.  I believe the deck was added by the current owner?  The current motor installed is equipped to move the house a quarter in 15 seconds while the desert views outside the triangular-shaped windows change. 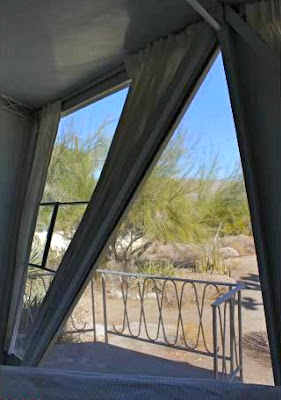 And to top things off, there is lore of the Beatles partying in the house while on tour in Los Angeles in 1965, while visiting Snow Creek local, Eric burden from the rock group, The Animals.

This is the quintessential mid-century modern retreat, full of engineering an imagination.  Anyone looking for a vacation home in the desert should not pass up this opportunity.  If I can be of any assistance, please let me know.  The owner has requested not to operate the rotation equipment until an offer has been accepted.
MLS listing courtesy of Andy, Svenn Kelli, Windamere RE.
Posted by modernhomesla at 3:56 PM